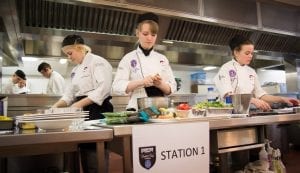 their places in the prestigious Country Range Student Chef Challenge 2017. The victorious teams were:

Now in its 23rd year, the annual Country Range Student Chef Challenge, which is run in partnership with the Craft Guild of Chefs, has become the pinnacle for full-time hospitality and catering college students looking to showcase their culinary prowess and creativity, while developing “real life” catering skills and experience under intense pressure situations.

This year’s theme was ‘Healthy Gourmet Fine Dining’ and each team had 1½ hours to create and plate a three-course menu which consisted of the following:

A vegetarian starter containing at least one super grain, such as amaranth, chia seeds, freekeh or quinoa
A main course that can contain meat or fish but must be centred around imaginative healthy cooking techniques
A dessert that should contain fruit where possible and refrain from containing too much butter and cream

Craft Guild of Chefs’ head judge Chris Basten commented: “It’s all about taste and flavours but we are also looking for skills, technique, team work and character from the teams, as a three course menu is not easy to produce in just 1½ hours.  The semi-finals have provided some amazing dishes so it’s a credit to all the teams and their college’s catering departments.”

Emma Holden, Country Range Student Chef Challenge competition manager, said: “The semi-finals were enthralling viewing with some incredible menus and creativity on show. With the quality so high, the judging was extremely difficult and the margin between qualifying was tiny, so commiserations to those who didn’t quite make it. For those who did, a big congratulations.”

The remaining eight teams are set to do battle in the Live Theatre of ScotHot, Scotland’s biggest food, drink and hospitality show held at the SECC in Glasgow, on 15th March.