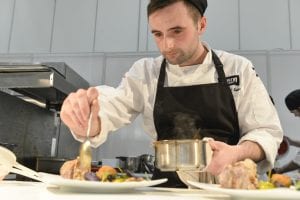 After his meteoric rise from plumber to chef at Outlaw at the Capital, 2016 Country Range Student Chef Challenge finalist Sean Comiskey is imploring more students to enter this year’s challenge before the 30th November deadline. When the recession wrecked his plumbing plans in 2009, the thought of working in a Michelin-starred kitchen wasn’t even a pipe dream for Sean Comiskey. But after unexpectedly unearthing a passion for cooking, retraining at South East Regional College and performing brilliantly in cooking competitions, the 26-year-old talented chef is set to embark to London to take up the position at Outlaw at the Capital in early December after completing a stage there in early October.

Now with just under a month to go until the deadline for the 2017/18 Country Student Chef Challenge, Sean is urging more student chefs to enter before the 30th November

Sean Comiskey said: “For any student chef serious about improving, testing themselves and going as far as they can in professional kitchens, the Country Range Student Chef Challenge is the pinnacle.  Competition cooking is as close to working in a fast-paced, high-pressured kitchen as it gets so it’s the ultimate test of skills, temperament and the whole experience provides a real confidence boost.”

Born in Lisburn to the south-west of Belfast, after leaving school Sean completed his apprenticeship in plumbing and was soon earning money and working all around the UK.  When the recession hit in 2009, the plumbing work unfortunately dried up and Sean was back at home and out of work. Not one to ever sit on his haunches and complain, Sean set about getting any job he could and soon arranged an interview for a kitchen role at a local café, even though he had never previously cooked before. After an evening’s training from his mum, Sean was as ready as he could be and aced the interview. From starting out at this small café, it didn’t take long for his passion for cooking to grow and soon Sean moved to the illustrious Deans in Belfast.

Sean Comiskey said: “It was at Deans that I first really got the food buzz and realised the difference between good and great food. It was soon clear to me that in order to be the best and develop, I really needed to re-train.”

Sean registered for a course at South Eastern Regional College (SERC) to help fill the knowledge and skills gap and for 3 years spent his time between college and the Ballyrobin Country Lodge Hotel under head chef and course tutor Jim Mulholland’s watchful eyes. It didn’t take long for Sean’s talent to be recognised and soon he was leading the way in class, at the Ballyrobin and in various student chef competitions.

Since completing his course in 2016, Sean was lucky enough to get a full-time role at the Ballyrobin and has been instrumental alongside Jim Mulholland in helping the eatery to win Hotel Restaurant of the Year at the Food Awards Northern Ireland 2017.

Sean continued: “I really can’t thank Jim and SERC enough for the time, training, confidence and assistance they have given me.  Jim in particular has been an inspiration and has gone out of his way to help me so I will be forever grateful.”

Sean starts his new role at Outlaw at the Capital at the beginning of December and is urging more people to think about the professional kitchen as a career choice.

Sean comments: “For any other people out of work and not 100% sure what to do with their life, I would highly recommend the professional kitchen. Yes, its hard work but if you love food there is no better place to be so get down to your local college and check out the catering courses.”