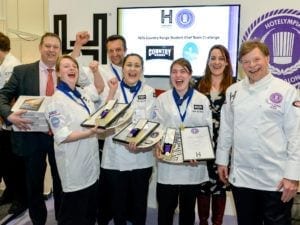 An all-female team from Loughborough College has been victorious in the Country Range Student Chef Challenge.

The talented trio scooped the top award in a highly competitive final against nine other teams at Hotelympia on Thursday (March 3).

The team – Daniella Bromley, Emily Bucknall and Rebecca Brooks under the tutelage of their chef lecturer Darren Creed – are the first all-female winners in the competition’s 22-year history.

The Challenge targets teams of three full-time student chefs studying hospitality or catering college courses across the UK and requires the preparation, cooking and presentation of a three-course, two-cover menu created around a theme.

For the 2015/16 Challenge, which is run in conjunction with the Craft Guild of Chefs, competing teams were asked to go ‘Freestyle’ by presenting a menu that embraces the modern trend for clean, well-portioned and precisely executed cooking. Menus had to be produced using a maximum of £8 worth of ingredients per cover and should be balanced with the three courses working well together.

Darren Creed, chef lecturer of the winning Loughborough College team, said: ”I’m so pleased for the three of them. They worked incredibly hard and always listened and went away and tweaked their menu until they were completely happy with it.

“Winning the Country Range Student Chef Challenge will really set their career off on the right path now.”

The winning team will receive a five-day work experience week assisting the Craft Guild of Chefs culinary team at the Culinary Olympics in Germany.

Coral Rose, managing director of the Country Range Group, said: “The standard of entries this year was incredibly high and we extend our huge congratulations to the team from Loughborough College, who were deserved winners.

“The Country Range Group is extremely proud to sponsor this prestigious competition. We are honoured to be able to champion the chefs of the future and I never cease to be impressed by the range of talent on offer.”