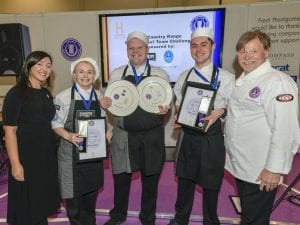 Following an enthralling final played under the watchful eye of a live exhibition audience at Hotelympia on Wednesday 7th March, City of Glasgow College fought off fierce competition from nine other colleges to scoop the prestigious Country Range Student Chef Challenge crown.

Under the tutelage of lecturer Robbie Phillips, the winning team, which consists of Erin Sweeney, Jordan McKenzie and Lee Christie, came out on top in a highly-competitive final where they were required to cook a three-course, three-cover menu in 90 minutes.

While the judges were incredibly impressed with the level of skills, professionalism and creativity on show from all the ten teams, it was London’s Westminster Kingsway College and Northern Ireland’s South East Regional College that took the runner up places on the day finishing 2nd and 3rd respectively.

This year’s theme ‘Around the World in Three Spices’ meant teams had to use a different fresh or ground spice in each of their courses.

In addition to taking home the much-coveted title, the City of Glasgow College team also each won a bespoke set of three Flint & Flame knives, a trip to the 2018 Universal Cookery & Food Festival, Westlands, in September 2018 and they will be treated to one night’s accommodation and dinner at Michelin-starred restaurant Simpsons in Kenilworth.

Winning team member Erin Sweeney, who was competing in the challenge for the second year, said:

“We still can’t quite believe that we’ve won but we’re completely and utterly over the moon. While it’s been incredibly tough, it’s literally been the best experience of my life.  We’ve put in so much effort and I have lost count of the times we have practised the dishes so we’re thrilled and very proud of the victory.  The competition tests all the skills you need to work in a professional kitchen so having this victory on my CV will be a huge help as I look to begin a career in a professional kitchen.”

“I’m very proud of my team and what they have accomplished.  They’ve worked so hard together as a team, they’ve shown amazing technical ability and a desire to improve so they thoroughly deserve it.  Glasgow maybe didn’t have the best reputation for food but thanks to our former colleague Gary McClean and a buzzing food scene in the city that has all changed.  The team’s win today is further proof that Glasgow is not only a key fine food destination but it’s a city that is producing talented young chefs.”

“A huge congratulations to the City of Glasgow College team on winning this year’s hotly-contested competition. Not only did Erin, Jordan and Lee show they could handle the pressure of cooking in front of a live exhibition audience but their dishes were incredible and wowed the judges when it came to taste. The standard shown in this year’s competition has been amazing so a big thanks to all the teams and lecturers for all their effort.”

“The standard of cooking by the students increases every year and as we expected there were some incredible dishes and creative menus on show.  It’s never easy to cook a three-course, three cover menu in 90 minutes, especially in front of busy crowd so a massive well done to all of the college teams competing today.  Each and every team can be proud of the achievements but well done to City of Glasgow who worked brilliantly together as a team and impressed all the judges with their well balanced, flavour-rich and beautifully presented dishes.”

In addition to competing for the Country Range Student Chef Challenge title, the ten teams were marked as part of Hotelympia’s Salon Culinaire by international judging standards with Gold, Silver, Bronze and Merit certificates being handed out accordingly. With the standard incredibly high in the live final, the full list of teams and awards are below:

Click here to register your interest in the 2018/2019 Challenge